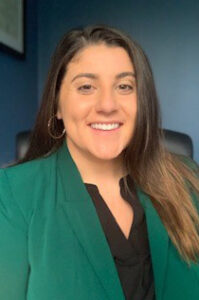 Nicole Christine Haddadnia is an Associate Attorney at Johnson & Laws, LLC where she focuses her practice on defending Civil Rights Litigation. She was raised in Queensbury, New York and currently resides in Saratoga County. She earned her bachelor’s degree from the State University of New York at Albany in 2017 where she majored in Political Science and French. She earned her Juris Doctor degree at Albany Law School where she graduated in 2020. During law school, Ms. Haddadnia received the Deans Scholarship and served as President of the Intellectual Property Law Society and President of the Soccer Club. She graduated with a concentration in intellectual property with honors.

Prior to joining Johnson & Laws, LLC, Ms. Haddadnia gained experience working as a legal intern for a boutique immigration firm in New York City. During her time at law school, she worked as a legal intern in the Immigration Clinic at the Albany Law School Clinic and Justice Center, as a legal intern at the SUNY Research Foundation, as a Law Clerk at a family and matrimonial firm in Albany, New York, and as a Research Assistant to one of her Professors at Albany Law School. She also worked as an Associate at a prominent law firm in Albany, New York where she practiced mass tort law.